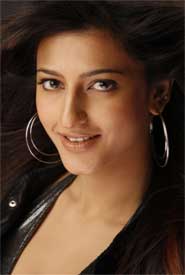 If rumors are to be believed, the next young romance brewing in Bollywood is between the beautiful Shruti Haasan, who made her debut opposite Imraan Khan in Luck, which did not fair too well at BO, and the talented Rang De Basanti actor Siddhant, who portrayed 'Karan'.


According to a source, Shruti and Siddhant have been spotted together many times and seem to be attending various events together. Additionally, it seems as if papa Kamal Haasan is aware and in approval of this bonding between Shruti and Siddhant, the latter of whom he also finds professionally sound and skilled.

Earlier on, Siddhant shared a relationship with Soha Ali Khan, which did not last and took the actor a year to recover from. Thereafter, he met Shruti at a party and they hit it off from then.

While Siddhant wasn't available to comment on this, Shruti has denied any romantic linkup with the actor.
Featured Video