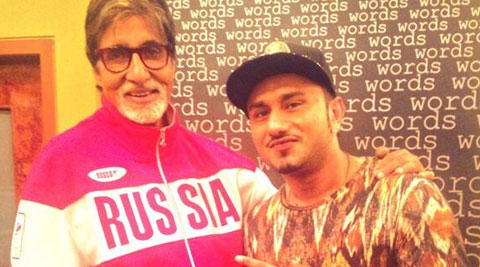 Yo Yo Honey Singh, whose numbers are a hit among the Indian youth, is awed by the energy of 71-year-old thespian Amitabh Bachchan, with whom he has recently collaborated for a song.

The duo shot a song together, and Honey Singh can't stop raving about the Big B.

"It's like being in a room filled with kinetic energy. Shooting with the Big B made me feel so old and inadequate. Not for a minute does he remind you of who he is. In fact, I felt I was with someone much younger than me," said the rapper, who turns 31 this month.

The song that they shot is a promotional video for Big B's forthcoming release "Bhoothnath Returns", and the rapper, often reprimanded for his bold and crass lyrics, made sure the words used were not "even remotely irreverent".

"I had to be very careful. It is okay to use casual trendy words for the younger stars. But the Big B is a star of stars," said Honey Singh, who says he spent sleepless nights trying to be politically correct for the Big B.

"It isn't as if we decided to be prim and proper in the song. There is a great deal of masti (fun) in our number. Bachchan sahab likes to have fun with the young. But I had to exercise self-censorship for the first time because this was for Bachchan sahab, and it was going to be incorporated into a film targeted at children," he said.

The song was shot over two days. At the end of the shooting, Honey Singh and his gang organised a party on the sets.

"We had this huge cake which said, 'Thank You, Mr. Amitabh Bachchan' and we partied hard at the end of the song. Bachchan sahab has spoilt me. He is addictive. Everyone who works with him wants to do so again. So, how am I an exception? Yes, I've plans of doing more music with the Big B," he said.