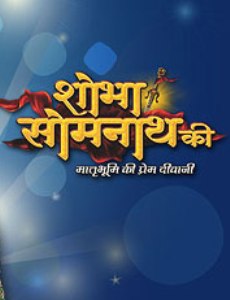 Tellybuzz had earlier reported that Zee TV's Shobha Somnath Ki would end on the 19th of February. But since there was no telecast last week , the show's end has been postponed by a weel.

A source informs, "Last week due to Zee Cine awards, two episodes were missed out. Therefore instead of ending the show on the 19th,  the channel has given an extension of a couple of weeks. Today is the last day of shoot."

A source informing on the end track reveals, "As Ghaznavi (Vikramjeet Virk) is in love with Shobha (Srishty Rode), taking advantage she misleads him and his whole army, out of the forest. Accordingly the whole army, along with Shobha and Ghaznavi, get trapped. A windstorm attacks the whole army leading to the death of many. Ghaznavi too gets dumped into the sand and that is where Shobha kills Ghaznavi with a trishul. Fighting back, Ghaznavi stabs Shobha with a knife."

"In the injured condition, Shobha rides away on her horse but on the way she breathes her last, "signs off the source.

We contacted Vikramjeet Virk and he says, "Yes, today is the last shoot of the show and it was great to be a part of such a huge costume drama."

With this, it's end of the battle between Shobha and Ghaznavi!

9 years ago The show had good plot.As per Chatursen's novel Shobha existed.But I think production house seldom had the plot as per Chatursen's "Somnath" as they claimed.I guess they had taken some other source along with this novel to depict and outline Shobha's character.I fail to understand how the concept of the show was unclear to some people who have commented here.May be saas bahu craps and illogical love stories catering to teen fantasies make sense to them.History is not something which Indians have always read in text books.It was always something beyond that which has been deliberately withheld from the masses by the politicians of this nation.For the Indian historians only Moguls constituted Indian history.I would recommend people to read "Somnath" by Chatursen. Jai Somnath!!!

+ 3
9 years ago this was actually not a historical show..was only inspired by history of somnath lol..coz its not sure that shobha was historical character or was only myth..and then all the tracks they introduced was imaginary...and now mahmud's death is just distortion of history as mahmud successfully looted somnath and died much later in his own gazni

9 years ago THE SHOW WOULD HAVE GOT BETTER TRP's IF THE PRODUCERS HAD NOT CHOSEN SRISHTY RODE AS A MAIN LEAD TO PLEASE HER FATHER!
#
To please Srishty's father, they could have given Srishty some other role but not of Shobha and that would have saved this show and many peoples job!
#

+ 2
9 years ago The show would have lasted longer if the CVs would make it interesting..sad

11 years ago what did they made out of such a pretty girl :@