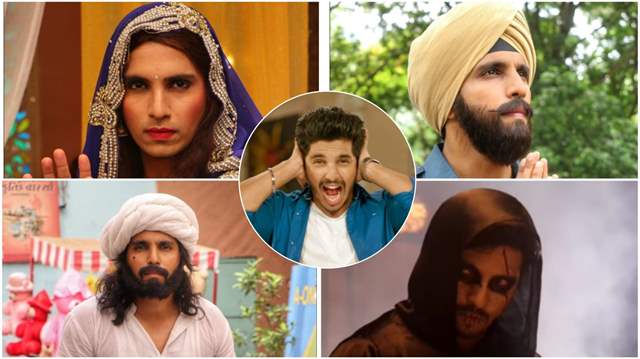 Star Plus show ‘Pandya Store’ has kept the fans glued to the TV screens. The current track has Shiva trying to hide from the entire family while they feel that Shiva is no more. Dhara and Raavi have learned the truth but for their agenda, they will have to keep the news under wraps for few more days. Shiva is seen disguising himself into interesting characters as he tries to hide his identity.

Until now, the actor has been seen in around five disguise looks. Kanwar Dhillon who plays the character of ‘Shiva’ in the show is doing quite well in the show. He’s making all the disguise looks come across authentic and entertaining at the same time. His fans are surely loving to see him get a varied scope of performance in the show.

India Forums got in touch with Kanwar and asked him about playing several characters in the show, he quipped, “Well, yes, off late I’ve gotten an opportunity to experiment with a lot of disguises. I became a Sardar jee for an episode, tried my hand on being a vegetable seller, bangle seller and there are a few more interesting looks that Shiva will don and I want to keep it a surprise for the viewers. It’s always great to do different disguises and characters because it gives you a chance to show your abilities and craft more with body language, voice modulations etc. I personally love it and have a lot of fun playing these disguises and experimenting with the looks. Having said that, it’s not that easy to shoot in all these get-ups all day long because your face is full of glue that’s used to stick those moustache and beards. It comes across as fun but a lot of hardwork and patience goes behind making the looks promising”.

It’s not that easy to shoot in all these get-ups all day long because your face is full of glue that’s used to stick those moustache and beards. It comes across as fun but a lot of hardwork and patience goes behind making the looks promising.

ShiVi fans (Shiva and Raavi) are longing to see their favourite couple back together. Talking about the love from fans, Kanwar said, “Oh yes! The fans are upset with the situations that Raavi and Shiva have been facing. Their reaction to ShiVi’s vulnerability is almost instant. They’re happy when Shiva-Raavi are happy and sad when they’re sad. It feels great to have developed such a connect with the fans”.

Show some love for Kanwar Dhillon in the comment section below.

+ 3
5 months ago Going good Kanwar Dhillon, Your talent , diligence & let’s say: Shiddat towards your craft is treat to watch! Thank you for bringing a different kind of Make lead on ITV : normal, simple, ridiculous at times, with all human traits!

+ 3
5 months ago Kanwar Dhillon is getting to show his ability as an actor in the various disguises that he is adapting. He is doing an amazing job. Both Kanwar Dhillon and Alice Kaushik are just amazing to watch on screen as Shiva and Raavi

+ 11
5 months ago Kanwar Dhillon, is always amazing when it comes to acting his scenes in the show and now with the different disguises and body language he has taken it up one notch higher. Kudos to his effort and wanting to try something new all the time. Kanwar Dhillon and Alice Kaushik as Shiva and Raavi are indeed a treat to watch on screen.

throwaway123 5 months ago Kanwar is so versatile, is there anything he can't pull off? Its good that he is enjoying the work and audience too will appreciate, but honestly this comes across like makers extracting evrything out of him for trp. Things wouldn't have gone so downhill had they focused on education track instead of some useless characters. Btw, a job well done by makeup artist and excited for upcoming disguises.

5 months ago 'Kanwar Dhillon' the name is itself enough to sport for Versatility. So happy to see him getting the due credits he always deserved.Looking forward to each & every disguise he carry out.

5 months ago Kanwar Dhillon is such a talented actor. Hope he gets the recognition he derserve.

+ 5
5 months ago Kanwar Dhillon's growth as a performer is evident as he pulls off each of the looks on the show with complete ease and accuracy. Looking forward to the other disguises.

+ 3
5 months ago Kanwar Dhillon is one of the hardest working actor I have come across who excels in every role given. Looking forward to Bhootnath and Shivani Pandya avatar 😀