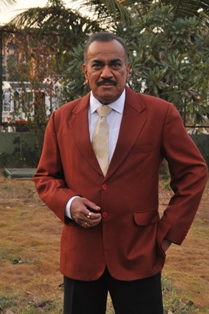 The fans of Sony Entertainment Television's popular crime show CID are well aware about the show completing 17 years, but here's some unknown trivia on this show.

Did you know that when the show started it was just a unit of 10 members which has now grown to more than 100 members. For more interesting facts, read on...

A little birdie from the sets informed us that Shivaji Satam popularly known as ACP Pradyuman is a multitasking person and since the day one of shoot he has been dedicated and given everything to make it the best show. When asked Shivaji Satam nostalgically added, "The whole team of CID was a tiny group of around 10 people, including the cast and the crew. Due to lack of crew members there were days that even I used to help the crew by holding the lights. We all played a pivotal role in the making of the show so that the episode could air on time".

It is because of the dedication and hard work of the team that the show has received such a huge response from the audience and continues to be the most loved show.
11 Likes

visrom 6 years ago love u sir.

Nice to read about your early days. hope you continue forever and ever.

dreamfanatic 6 years ago Very sweet aricle, shivaji sir is always so sweet and down to earth, really appreciate the work of these 10 members who brought up the show to the height on which it is now, praiseworthy work..

Veena.. 6 years ago sweet artice... Shivaji Satam sir is such a down to earth person :)

pinkpearl5 6 years ago Thanks for the lovely article tellybuzz! Loved the interview a lot! :) that's really amazing how 10 people from the start made the show as amazing as it is today and from 10 to 100 unit members is a big thing. Well a show to last for 17 years is a big thing. Beyond perfection. :D

shivani003 9 years ago Honestly I dont like the posters.... They look kinda cluttered :S

kavya.b 9 years ago i'm all in for Ranaaaa
he was gr8 in leader, his debut film
i hope this film also bring him more fame n name
but selfish me, want him in telugu movies moe

amukta 9 years ago He has done a good job for his first movie leader in Telugu and i hope he does well.Good luck Rana!!!!!