Bollywood actor Shiney Ahuja's wife Anupam Wednesday said he was being framed in the rape case involving his domestic help and added she had no qualms in saying she is 'Mrs. Shiney Ahuja'. 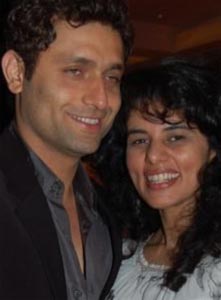 Featured Video
Speaking to a large crowd of mediapersons, Anupam said she doesn't know who is behind the alleged frame-up, but expected the truth to come out soon.


Maintaining that she would not speculate or the motives, she said: 'But it is hundred percent a frame-up.


'The police are doing their duty and the matter has to be proved in the court of law. I am confident that the truth will come out in the court soon,' she added.


Rubbishing media reports that Shiney had confessed to raping his teenaged maid, Anupam said this was a wild speculation without basis.


'What will you believe? Every day there are different versions of the same thing. But truth has only one version. Truth is universal and it cannot have multiple versions. The truth is that my husband is absolutely innocent, and truth will win,' Anupam said.


After the maid complained to police Sunday evening and Shiney was detained, both of them have undergone medical tests in a government hospital. On Wednesday, DNA samples taken by forensic experts from clothes and other personal belongings of the actor and the victim were sent for tests.


When asked about the medical reports of the victim which allegedly confirmed that the teenage girl had been raped, Anupam said: 'Nobody has seen medical reports. Let the court decide. They (police) are doing their job and I don't have any problem with them. I have full faith in our judicial system and I am hundred percent sure that Shiney will walk out innocent.'


Aked if she had met the actor in the Andheri police station lock-up, Anupam said she did not need to meet him to know the truth.


'Yes, I have seen him in court, I looked in his eyes and I knew the truth. I don't have to meet him to know what he said. There is a legal system and through proper channels I have learnt that he has not confessed.'


To a question, Anupam said she is proud to be Shiney's wife and that he has been a good husband, good father and a good life partner.


'I am not a girl in love with him blindly, I know him for 15 years, he has no vices... doesn't drink or smoke and comes home regularly,' she said.


Shiney was arrested Sunday night on charges of raping his domestic help and remanded to police custody till June 18.


The victim had been working with him for the past one year. She has accused him of repeatedly raping her.