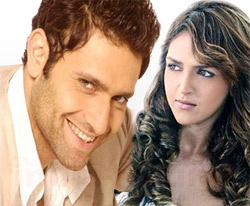 Featured Video
Shiney Ahuja and Esha Deol for the first time on screen in his directorial debut 'Hijack' and says they add a breath of fresh air to the movie.

'I knew I had a winning cast on hand since debut pairs provide an unusual freshness to the film. For a film that needed them to pull through close interactions in a highly tense atmosphere, it was very critical that they share a good rapport. If you ask me they have a very lively screen chemistry which comes across in the movie,' Shivdasani said.

While Shiney plays the tough action hero with his electrifying stunts in an effort to save his daughter as well as other passengers on a hijacked aeroplane, Esha portrays a gutsy airhostess, who helps Shiney accomplish his daunting task.

The action thriller is scheduled to release in May.