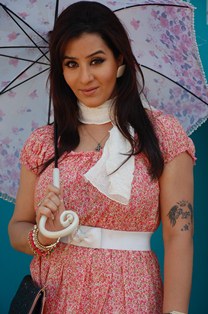 Popular TV Actress Shilpa Shinde, who was last seen in SAB TV's show 'Chidiya Ghar', is all set to team up with SAB TV once again as she makes an entry into Lapataganj - Ek Baar Phir. Shilpa, who in her last show, played the character of a very traditional Koel', will be seen playing a Christian girl named Marry Demello in Lapataganj.

A source from the sets tells us that before shooting for the look test, Shilpa suggested few fashion ideas to the production team to get the perfect look of a modern Catholic girl. Shilpa even got some of the outfits from her sister's boutique and was pretty excited to mix and match dresses for the perfect combinations. Shilpa's character Marry has funny mannerisms and a very peculiar catholic tone.

Excited about her new role, Shilpa says, "I am happy and excited to be part of SAB TV once again. My character Marry is similar to that of a modern urban woman of today. With a positive approach towards life and filled with energy, she knows her traditional values. I have lot many friends who are catholic and I have observed and seen them very closely. So it was easy for me to get into the character and get my dialect and the tone quickly."

Viewers will be in for a surprise as they see Shilpa Shinde in a new look.

+ 4
10 years ago i luved the movie, he was awesome as Bittu and truly the most promising newcomer....waiting for his next movie...i hope he chooses his movies wisely and not commit any mistakes :)

+ 4
10 years ago Guys the entire movie of Band Baaja Baarat n Anjaani Anjaani has been posted on Youtube. Its in only one link and is awesome quality. I have given the links here:

+ 3
10 years ago OMG !!! he's looking sooooooooo cooooooooool man
he truely is one of the most promising stars