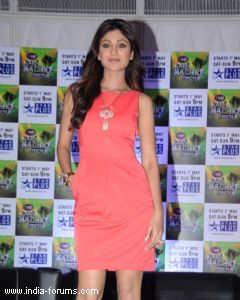 The actress has been putting in a lot of hard work and is regularly practicing at her place, confirms a source from the channel.

"Shilpa is also not using any harness during her rehearsals for the performance," the source added.

The actress will be jiving to 'Pani da rang' from the film 'Vicky Donor', 'Ram chahe leela' from 'Goliyon Ki Rasleela...Ram-Leela' and 'Dhating naach' from 'Phata Poster Nikhla Hero'.

The finale will be aired on Saturday on Star Plus.

danceismyworld 6 years ago U are a superb dancer Gurmeet. U nd Debina did amazing in NB. Dances u guys have shown were amazing. Your each nd every performance is memorable nd will be cherished for long. Love u Gurmeet Choudhary. Keep dancing always.

GC_FAN 6 years ago Gurmeet Choudhary and Debina Bonnerjee Choudhary r the best dancing couple of NB 6. May God make them the winner of NB 6. Best of luck guys.

GC_TheKing 6 years ago Gurmeet Choudhary and Debina Bonnerjee Choudhary will win NB 6. God bless u and make u guys the winner of NB 6.

GC_TheKing 6 years ago Love u Gurmeet Choudhary. U and Debina r the most deserving jodi of NB 6. May God make u guys the winner of NB 6.

.Nikki. 6 years ago Love You Rithvik Dhanjani and Asha Negi