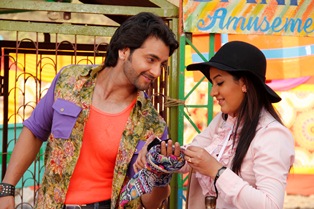 SAB TV's Lapataganj Ek Baar Phir is a lively TV series which shows daily life happenings in a small village and the funny happenings amongst the different families that reside there.

We all know about stories wherein a heroic youth saves the day by rescuing a damsel from the clutches of a villain. In the recent track of Lapataganj, viewers will be surprised by the turn of events in an entirely different fashion.

Mary played by Shilpa Shinde in the series, saves Lakhan played by Vineet Raina a Dabang inspector in the show from an accidental fire. Shilpa said, "I am a complete movie buff and have grown up watching Hindi movies all the time. I love romantic comedies and action thrillers and have always seen climaxes which have concluded in the hero saving the heroine all the time. In the recent track of Lapataganj, I will be rescuing Vinit from a fire which makes me the savior."

Vineet Raina said, "Lakhan is a typical desi hero character in this series and is a real knight in shining armour' kind of a personality portrayal. When I was told about the twist in the plot it surprised me a bit. It took both, Shilpa and me some time to get the act right as the roles were reversed for both of us. It was both a challenging and an amusing sequence that was enjoyed by us."

10 years ago ardently waiting for this film, after BBB. i am sure anushka, ranveer, the director(maneesh), script writer (habib) and salim-suleiman will cause hungama again in a yashraj film! <3 yeahhh haaa

10 years ago she's looking good with him. I think I'll watch it just cuz shes PCs cousin. Have really high expectations from her.
Best of luck for this project

10 years ago doesn't the story sound similar to bachna ae haseeno? playboy goes round town with many girls before finding his soulmate in the Aussie taxidriver? :P