View Profile
The graceful Diva, Shilpa Shetty is surely on a mission, as she enrolled herself in the 'Dove Self-Esteem Fund' campaign this week in UK to raise the self-estee 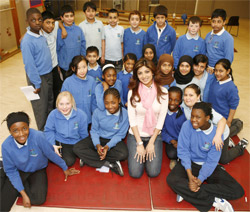 Featured Video
m of youngsters all over the world.

The actress took the first initiative as she joined an educational workshop called BodyTalk at Sebright Primary School in London and as she delivered a personality development lecture to the youngsters there, she says, "There have been moments in my career where I have struggled with self-esteem, so I'm really pleased to be doing this workshop. As a person in the public eye, I understand the important role I can play in making a difference to the way young people feel about themselves".

A very popular personality in UK, following her success at 'Big Brother', the actress used her intellect in the right direction and inspired the future generation to move ahead and face the world. -(SAMPURN)