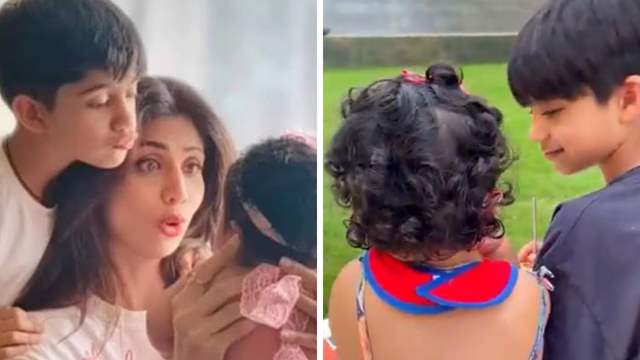 Today on the special occasion of Brother’s Day, Shilpa Shetty Kundra shared an adorable video of her kids Samisha and Viaan that is sure to melt your heart.

In the video, her son Viaan can be seen sitting with his sister Samisha as they engage in a cute talk. Later he also feeds her sister a sip of his coconut water.

Sharing the video, Shilpa wrote how she had rakhi brothers later in life but her daughter Samisha is lucky to have a real one. She wrote:

‘Having a younger sibling somehow makes the older one responsible, protective, mature, & even territorial (I would know!)I’ve had Rakhi brothers much later in life, but Samisha’s lucky to have a real one. To see this just makes my heart melt!! #HappyBrothersDay’

Raj Kundra and Shilpa Shetty opted for surrogacy and welcomed their babygirl, Samisha, on February 15, 2020. The couple tied the knot in 2009, and also have a son Viaan Raj Kundra together.

Earlier this month, Shilpa Shetty had informed that her family members including one year old daughter Samisha and son Viaan along with her husband Raj Kundra, mother and two house staff members have tested positive for Coronavirus. Fortunately, the actress had tested negative for Covid-19.