Aishwarya and Anwesha, the two finalists of Amul STAR Voice of India – CHHOTE USTAAD take the capital city – Delhi - by storm with their power-packed Punjabi Dhamal on Fri, March 28th, 10 p.m. only on STAR Plus. The evening gets the viewers in perfect dancing mood as the rock star Mika and Lab Janjua perform hit numbers like 'Sawan Main Lag Gayi Aag', 'Mauja Mauja' & 'O Pappe Pyar Karke Pachtaya' respectively. To add to the excitement, Bollywood actress Shilpa Shetty is the celebrity guest of the evening. 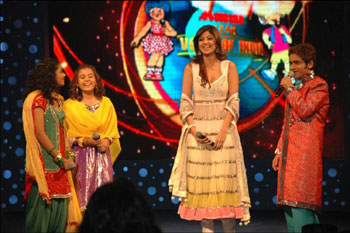 Featured Video
The show kick starts with the vibrant host, Abhaas coming on stage to perform on hit Punjabi numbers 'Jassi's Dil Le Gayi Kudi' & 'Kudiyan Sheher Diyan'. Anwesha & Aishwarya, the two finalists get into the groove with the song 'Baras Ja' which is dedicated to Shilpa Shetty and is followed by their solo performances. Aishwariya proves her versatility with the foot tapping number 'Soni De Nakhre' while Anwesha gets a standing ovation from all the judges and the crowd for her flawless rendition of the song 'Mahi Ve'. As the final moments close in, Pritam gets emotional about the show coming to an end. Aishwariya once again strikes perfect notes with her next performance 'In Dino' while Anwesha makes a superb attempt with the song 'O Meri Jaan' in female voice. Both the finalists get Shilpa to dance with them on stage while they do a jugalbandi on the peppy number 'Mast Kalandar'. The 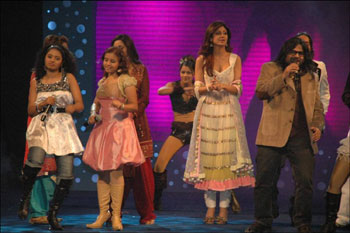 final surprise element of the evening is an awesome performance by the Voice of India runner up – Harshit Saxena on the song 'Jab Se Teri Naina'.

To ad to the entertainment quotient, Pritam brings the musically charged evening to an end with a stellar performance on "Mere Sexy Lady" (Unreleased Album) and 'Hare Ram Hare Ram' with Shilpa Shetty and everyone else dancing to his tunes.

Stay tuned and don't forget to miss your favorite Chhote Ustaads perform with the gracious Shilpa Shetty on Amul STAR Voice of India – CHHOTE USTAAD, Fri, March 28th, 10 p.m. only on STAR PLUS!!

14 years ago Yes, the girls rock! I'm dying to see Anwesha's performance that gave her a standing ovation. Also waiting to hear Aishwarya's sweet voice singing In dino. Wish both the girls the very best.

14 years ago Guys we are again in for a treat Anwesha getting standing ovation. Hard work and talent needs no boundries. Anwesha is acomplete package.