Shilpa Shetty is quite perturbed that the makers of her 2005 superhit Kannada film 'Auto Shankar' are all set to release a dubbed Hindi version called 'Shilpa – The Big Don' in the first week of January 2008 all over the country without her knowledge and consent. 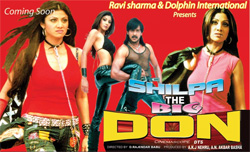 Featured Video
"Shilpa was shocked to see posters and advertisements of the film published in film trade magazines some time ago, as she wasn't even aware that the film had been dubbed," said her publicist as Spokes Person.

"What stunned her more was the title. Yes, she does play a 'lady don' in the film. In fact, during the film's release two years ago, she had even termed her character, an ode to Gabbar Singh. But 'Shilpa – The Big Don' seems to be just an amusing attempt to cash in on her 'Big Brother' win," Spokes Person added.

He added, "South movies are cool but they have a specific flavour which is quite different from Hindi cinema. When the language changes a lot of nuances in a film can change context. This might seem extremely awkward and could turn into an uneasy development for Shilpa."

To add to this, the dubbed version even has two songs The promo of 'Shilpa – The Big Don' has several scenes where the hero talks degradingly about the heroine's character, while apparently 'taming' the 'lady don'. A fiery Shilpa retaliates with a dialogue in the film, "Tu mere nishaane par hai, dekhna main tujhe kaise barbaad kar ke deti hoon". So will Shilpa do something similar in real life? Will she press charges in court to stop the release of the film. Her publicist thinks it won't be the right thing to do. "The re-release could be embarrassing, but from a PR point of view, I would not advice Shilpa to stop her own film."

Along with Shilpa, the Kannada blockbuster directed by D. Rajendar Babu, stars South superstar Upendra along with actresses Radhika and Sudharani . The movie was filmed at a variety of locations including Austria, Finland, the Bangalore Palace and the Mysore Lamps Factory.

It is the story of an auto rickshaw driver called Shankar, belonging to the middle class section of the society. Shilpa, who plays a money-lender and a lady don, is portrayed as a boorish character. She is unscrupulous in recovering loans given to the poor and designs crude methods to recover money. But in the end, she learns a lesson that reforms her attitude. She makes amends and Shankar embraces her as the two fall in love.

"Shilpa's role in the film earned her the name 'The new Gabbar Singh' in the South," said her spokes person. The movie also sparked off a controversy with regard to a sensuous photograph from it. A Madurai-based lawyer had filed an obscenity case against Shetty, calling the photo vulgar.

The makers have even designed a website www.shilpathebigdon.com in the name of the Hindi dubbed version of the film. On having a glimpse at the film's promo put up on the site, one can well fathom the embarrassment Shilpa will have to go through on its release.