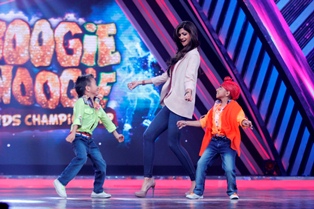 Boogie Woogie Kids Championship contestants Preetjyot and Urgen where seen smiling from ear to ear when svelte actress Shilpa Shetty kissed them on their cheek. To know more, read on...

Shilpa Shetty along with Harman Baweja made an appearance on the show to promote their upcoming film 'Dishkiyaaoon'. Shilpa was in complete awe with the talent at display.

Impressed by their highly entertaining performance, Shilpa couldn't stop herself from joining them on stage and grooving on the same song. She later landed a peck on the cheek each for Urgen and Preetjyot.