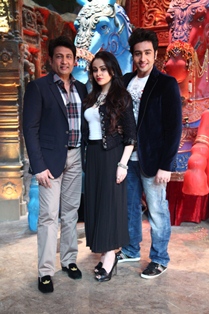 It will be a nostalgic moment on the sets of Comedy Circus Ke Mahabali when actor - director Shekhar Suman will make an appearance on the show to promote his upcoming directorial venture 'Heartless'.

He will be seen sharing co-judging with Archana Puran Singh and Arbaaz Khan. Accompanying Shekhar will be his son Adhyayan Suman and his co-actress Ariana Ayam.

The actor will be tremendously delighted after watching all the performances and expresses his feelings by saying, "The show has been running for the last 7 years and has still maintained the brilliance with which the show had started years back. We are all proud to have such talented comedians like you all".

This is not all! Shekhar Suman was also in a jovial mood and crooned on stage with Jamie J on Asha Bhosle's song. He will also danced with Krushna Abhishek on the song 1234 get on the dance floor'.

Looks like it will be a happy homecoming for Shekhar!