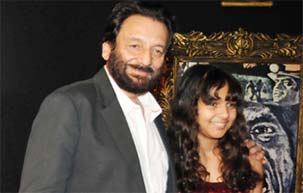 Shekhar Kapoor is amazed by the talent of his 13-year-old daughter Kaveri, who is busy recording her first music album.

Kaveri is not just recording the song, but has also written the lyrics and co-composed the music with Avitesh, son of music director Aadesh Shrivastava.

"She writes and composes her own songs. At 13, the depths of her lyrics are amazing. When did she grow up," Kapur tweeted Friday.

The teenager is Kapoor's daughter with Suchitra Krishnamoorthi, who also sings.