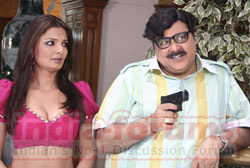 Actor, Director & Producer Shashi Ranjan's second Bollywood film "Dhoom Dadakka" is almost 90 % complete after an extensive shooting schedule in Bangkok. An Indo-Pak Co-production, Dhoom Dadakka is being produced by Shashi Ranjan along with Syma Khar from Pakistan. Shashi Ranjan also directs the film that is now 90% complete with just a couple of songs remaining to be filmed and these will be canned in the month of October, in Mumbai.

A rollicking comedy, the film completed a 20-day schedule at Bangkok and is mostly shot in the island country. It stars such comic stalwarts as Anupam Kher, Satish Shah and Satish Kaushik. Besides the terrific trio, the film has mint-fresh young leads in Shaad Randhawa, Aarti Chabria, Sammir Dattani and Shama Sikandar. Hilarious support is provided by Gulshan Grover, Jackie Shroff, Deep Shikha, Razzak Khan, Bhawana Balsavar, Bobby Darling and Zac, a young actor picked up from an extensive Talent-hunt in Pakistan. 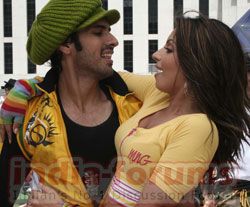 Music Director, Roop Kumar Rathod, has already recorded all the songs of the film. There is an Item-number sung by Sunidhi Chauhan… a rollicking Punjabi flavoured duet by Daler Mehndi and Jaspinder Narula… an extremely robust Holi number in which Anupam Kher and Gulshan Grover join Udit Narayan, Roop Kumar Rathod, Kalpna and Tarannum, in sheer fun… and a romantic number sung by Shaan & Shreya Ghoshal.

Another highlight of the movie is the debut of Anupam Kher, Satish Shah and Gulshan Grover as singers. They lend their voices to a special holi song "Tarara suskari maare", which was recorded at Ashok Honda studios.

We invite you for a tete-a-tete with the director on the progress of the movie. 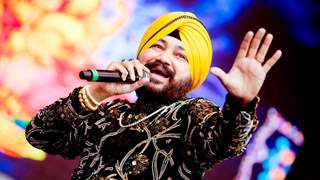 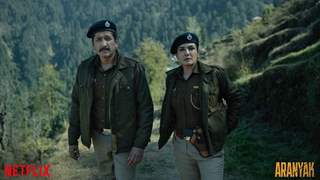