Indian television’s favourite bahu is back to the pavilion, as Smriti Irani returns as Tulsi in Kyunki Saas Bhi Kabhi Bahu Thi after a year long hiatus. Smriti returns to the Star Parivaar to become an integral part of the Virani household again.

The Telly Buzz team in chat with Ekta and Smriti. 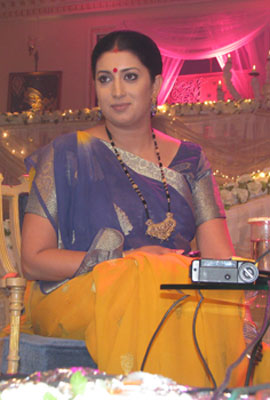 Featured Video
So Ekta, what prompted you take Smriti back in Kyunki?

Smriti and I met in the Global Awards, and I felt she was very gracious to agree perform for my awards ceremony. Talks had been going on between us since then and Smriti had also expressed the desire to come back. Kyunki has been very special for both of us and I always thought that Smriti was responsible for making Tulsi what she is today, and we decided to get her back.

Smriti, what do you have to say about the comeback?

Like Ekta said, our association has been right from the inception of the show. Ekta invited me for the Balaji awards and that’s where a new chapter began in our association. And I had never left Balaji. I always told Ekta, if Balaji ever needs me I will be more than obliged to be there. Hence I am back in Kyunki. And I feel quite blessed to be part of one of television’s longest running shows.

So was it pressure from the channel that compelled you more to bring Smriti back?

Ekta: Anupama did come and speak to me about getting Smriti back on the show. And she did make threatening phone calls to me (laughs). No, but seriously, there was no pressure as such from the channel. We did have talks among us and the channel was also in favor of this decision.

Smriti: It was a combined effort by Ekta and Anupama. Anupama also came up to me and said that, Ekta and you are such good friends so then why don’t you let it reflect in the show? And as I said, I would never have any qualms about working for Ekta, as she was the one who gave me my first break.

It has been noticed, since the walkout of Smriti, that the TRPs of Kyunki have been dwindling. So is this a last ditch attempt to revive the ratings of the show? 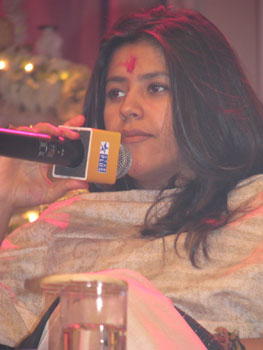 Ekta: I was waiting for this question. Initially it was said that Smriti left because the TRPs were low and now we are bringing her back to revive the ratings. If you have noticed, Kyunki has been one of Indian television’s longest running shows and is still doing well. The audience is always glued to their sets to watch Kyunki at 10:30. So getting Smriti back has nothing to do with the TRPs.

You’ll have been friends right from the time Kyunki began, so what went sour in the friendship?

Smriti: Ekta had told me that this is one question that is bound to arise at the press conference. I responded by telling her all I can say is let bygones be bygones. Why try and dig up buried graves when we all can look forward to a new beginning. If said in Tulsi style, I would say, “Thakurji ki iccha thi aur main aa gayi yahaan pe.”

But why Tulsi, why not a new show and a new character?

Ekta: That is because Smriti has always befitted Tulsi. When I was casting for Kyunki, and when Smriti arrived for the audition, I saw her and I made up my mind right from the beginning to cast her as Tulsi. Everyone was shocked as they said she was not meant for the role, but I stood my ground. Hence I could never think of Smriti as anyone else but Tulsi.

What happens to Gautami?

Ekta: I have immense respect for Gautami. Smriti was etched in the hearts of the audience as Tulsi. And it was a very difficult job for someone to step into her shoes at this stage, yet Gautami took up the challenge and did immense justice to the character. She is a brilliant actress. But right now I cannot say what will happen with Gautami, then the thrill of the show will not remain. So, just wait and watch to know what happens.

But a lot of people could not accept Gautami as Tulsi. 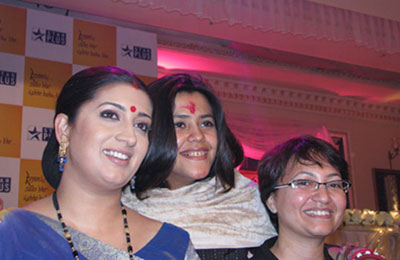 Ekta: See I got a mixed response from the audience when I replaced Smriti with Gautami. Some wanted Smriti back, while there were a lot of them who liked Gautami. But then, the audience has been accustomed to seeing Smriti as Tulsi, so it is pretty difficult for them to accept someone new. But yet Gautami did an amazing job essaying the character of Tulsi.

What did you have to say when you saw Gautami step into your shoes?

Smriti: As Ekta said, she conceptualized the character of Tulsi, but I gave life to the character. And I completely agree with her on that. But I was never upset about the fact that somebody else was playing the character. Just because I was not playing Tulsi anymore did not break my relationship with my audience. Even today, people still associate me with Tulsi. People have even asked me if I missed playing Tulsi and I said no, because I have received tremendous amount of adulation from my fans.

On an ending note, annotating on Smriti’s return to Kyunki, Anupama Mandloi, Senior Creative Director, STAR Plus says, “It is a momentous occasion for us. As we all know Kyunki has been a one of the longest running shows on television and it feels great to have Smriti back on the show. She has been responsible for making Tulsi the iconic bahu and everyone is eagerly awaiting her return.”

Although Ekta was reluctant to talk about what is going to happen with Gautami, a little birdie informed us that she will still remain in the show, but her character will turn somewhat negative as time goes by.

Gautami was pathetic as Tulsi...she neither had the personality nor the look needed for Tulsi.

And also Smriti looks better with Ronit as well as the mother of Hiten and Sumeet!!!!

+ 3
14 years ago WELCOME HOME SMRITI
Love you
bless you, for returning as Tulsi

14 years ago interesting!!want to see the change in the track to bring her back!!!

14 years ago thank you, can't wait for smriti to come back

14 years ago Is she really back?...will start watching it again...thanks Ekta

it's true than no one can play tulsi better than smirti.

14 years ago can't wait to see her....missed her.......it's true than no one can play tulsi better than smirti