The bubbly actress Shalini Kapoor is all set for a new venture on Zee TV. She will be entering Saat Phere tonight as a caretaker for Shweta. She was earlier seen in Saath Saath on the same channel. 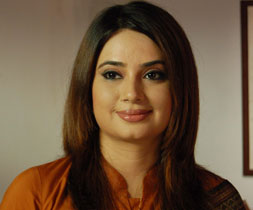 Featured Video
"I feel that Zee is lucky for me as this is my second show after my marriage. I'm very happy to do a cameo in Saat Phere", says Shalini.

Elaborating on her character she says, "I enter the show as caretaker and initially my character is very positive. It will only be discovered in the later stage that I essay a negative role who wants all the property of Nahar's family".

"It's an out and out negative role and a big challenge for me. I had been associated with comedy and periodic roles before, so this is something very different. One can say that this is the evil side of me", grins the actress.

She has got an offer for Zee's Jhansi Ki Rani too. "Well I have received an offer to play the role of mother to the lead. Jhansi Ki Rani did not have a mother, but there was this lady called Yashoda who took care of the girl like her mother", quotes the actress.

However, the actress is not sure whether she wants to do it or not. "Every thing has been confirmed, but today morning I got to know that the shoot has been shifted to Satara. Traveling there for two days in a week will be quite hectic, I feel. I will put before the producers this problem and will try to sort it out", she concludes.

As for now, Shalini is all set for her entry in Saat Phere tonight!!

13 years ago well, singh family deserves to be ruin.....since what they did to saloni and sawri

13 years ago Ha, let her get all of it! The Singh Parivaar deserves everything they get now! I hope Saloni and Sawri don''t do anything to save such selfish people!

+ 6
13 years ago Thanks.
Lets see how her character influences shweta.

13 years ago it`s good that she some one come to ruin singh family because they desarve this.and im shour this time also saloni save them.

13 years ago im happpie she is coming in to ruin them because after how they treated amrit, saloni and sawari they have no heart

romit 13 years ago i am quite surprise why all india serial is fighting for property everyone want other peoples property why ?
is it customs or traditional in india socierty and is it easy to transfer other people property so easily.............

13 years ago She is a sweet actress!
Wish her all the best and looking forward to watching her in Saat Phere tonight!!