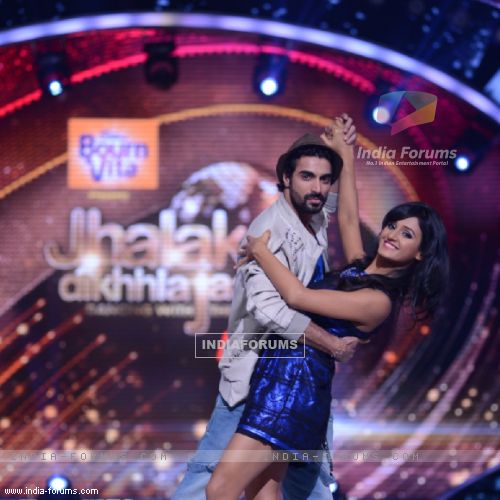 As the competition has reached a notch higher and entered its finale week in the popular dance reality show Jhalak Dikhhlaa Jaa Season 7, contestants are all geared and energized to give their best in this week as the winner will be announced on the 20th September.

Putting their best foot forward and taking efforts throughout the day these contestants Ashish Sharma, Mouni Roy, Shakti Mohan and Karan Tacker are all set to give a power packed performance for the finale round.

Well according to the latest development Shakti Mohan's choreographer Tushar while performing on the stage was injured badly. He had to be admitted in a nearby hospital. This tragic accident took place while the duo were rehearsing and all of a sudden Tushar fell down from the stage injuring his forehead badly.

Our source says, "Yes, Tushar had to be admitted in the hospital and has been taking treatment for his injury. While rehearsing for a group dance Shakti was seen performing with some other choreographer."

We tried contacting Shakti but she remained unavailable for any comments.

6 years ago Ashish Sharma looking forward to see you again on dance floor. Can't wait to see it. God Bless.

6 years ago Ashish Sharma
You've worked hard and your efforts have paid off
Congratulations on your Victory***
Wishing your dreams come true..keep rocking
Get well soon Tushar

6 years ago Ashish Sharma
You've worked hard and your efforts have paid off
Congratulations on your Victory***
Wishing your dreams come true..keep rocking
Get well soon Tushar

+ 2
6 years ago take care and get well soon tushar... love u shakti mohan

+ 2
6 years ago Hope mouni wins... She is both a fabulous and a.very graceful dancer! She rightly deserves to win!!

6 years ago Get well soon Tushar

Karan Tacker wishing u all d luck & best for finale

6 years ago Ashish Sharma
All the best for JDJ finale... I want to see you with the winner's trophy today.
Get well soon Tushar

6 years ago Rooting for Ashish Sharma to win, win it for us. Praying.

+ 3
6 years ago Get well soon Tushar...plz take care of ur self
Love u Shakti Mohan