This weekend a big secret gets revealed on the sets of Zee's Dance India Dance that one of the very talented contestants in the show has been tutored earlier by the Dance Guru, Shiamak Davar. And the lucky contestant to have got this opportunity is none other than Jai Kumar Nair. 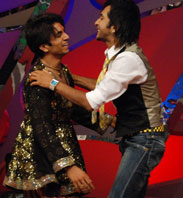 Jai Kumar Nair gave a stunning performance this week. "Jai, under Terence's able tutelage breaks all myth that he is inferior to his peers. He gives a superlative performance on the song 'manmohini teri ada' from the movie 'Hum Dil De Chuke Sanam'", states our source.

"His routine left everybody speechless. He got a standing ovation and accolades galore not only from the Dance Master but from everyone present on the sets," chirps the little birdie.

Terence choked with emotions ran to hug his favorite disciple who performed superbly on a genre which was not his forte at all. When everything was so hunky dory, the hitch came in the form of an AV.

Our sources revealed that, "Shaimak liked the performances of all the contestants on the show and enjoyed the episode. It was a surprise when the fact was revealed that Jai Kumar Nair was one of his students earlier."

"Shiamak praised Jai's performance to the hilt and wished him all the Luck. He also mentioned the fact that they had parted ways for some reason which he doesn't wish to recall & looks forward reuniting."

Our khabroo further states that, "The AV got over but Jai was caught in a volley of emotions in front of his present Guru, Terence Lewis. He openly declared that Shiamak was his guru and whatever he is, it is because of Shiamak."

The industry is aware of Terence and Shiamak's unpleasant relationship. "To top that just when Terence was luxuriating in Jai's triumph, his dear pupil just managed to snatch the cake away from him by openly acknowledging the fact that Shiamak meant everything to him. Master Terence could do nothing but digest the insult, but his grim expressions said it all!!", concludes the source.

Nothing to say….. Just blame it on reality!! It just catches you unaware...

13 years ago i wonder why shaimak and terence don''t like each other!

+ 6
13 years ago M sure they knew about it much before.....No body dances sooo well without training ....m sure terence mustve recognized sum trademark moves during the audition itself....and there must be sum profile they have to fill up before joining m sure....abt personal info....whether they have been trained in dance before...??

They mustve known abt this....just making a mayhem outta it now for publicity....though the show is good i have heard, not seen it though.....i wanna see it......

13 years ago another one of those media created controversy. We get a new one each week for this show. obviously audience is not stupid! Both choreographers are established mature adults n wouldn''t have this unpleasing negativity for sucha little thing. its all crap

Jai should have refrained from making such an emphatic statement when the truth is that Terence is whole-heartedly involved in the growth of all participants under him !

+ 3
13 years ago But its nice that the 2 gurus have same fav.......however bitter is the relation between the 2 gurus they at least agree that Jai is very much talented ;)

+ 5
13 years ago gurus are gurus and who ever it is they share the top most position. :D but if there are any probs between two gurus than it should be kept away from teaching:)

this shud be interesting

gud luck to them