Mumbai, Nov 21 Shahid Kapoor, who is here after his Spanish vacation, is trying to complete his ad shoots before he finalises new film projects. In one of the commercials, he has teamed up with Priyanka Chopra.

He shot two ads Wednesday in Madh Island on two 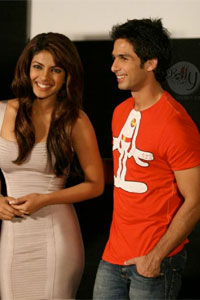 adjacent sets - one for a paint brand and the other for a coffee brand, the latter with Priyanka which required them to splash water on one another in a garden.

We asked Shahid about his double-ad shoot and he said: 'It was just another working day. What's there to say?'

Shahid and Priyanka are also shooting for Kunal Kohli's untitled film together and while shooting the ad both the actors tried to keep as much cordiality as possible. But apparently the duo simply refused to give joint bytes to the waiting television journalists who had gathered at the venue of the ad-shoot.

This refusal was most surprising in the light of the fact that media-persons had been invited to cover the shooting as a Shahid-Priyanka event.

Interestingly, director Ayaan Mukerjee, close friend of Shahid's, was also present at the venue to shoot another ad with Shahid.

'Shahid wouldn't budge from his no-joint-bytes stance, and Priyanka agreed with him. They both felt that at this point in their working relationship, the last thing they needed was televised togetherness,' said a source.