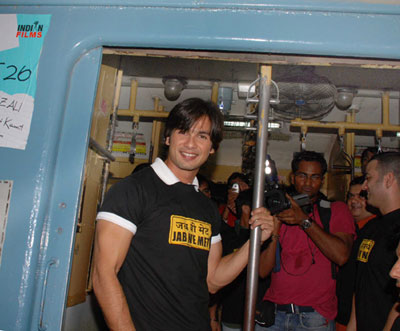 Shahid Kapoor sure seems to be excited on the release of his forthcoming film Jab we Met and from the looks of it, is all gung ho on promoting it too. We hear, that when he found out that the producers Shri Ashthavinayak Cinevision had painted two entire trains, from the western and central lines respectively with Jab We Met posters, Shahid eagerly expressed his wish to travel by those trains.
The producers took the necessary permission from the railway authorities to grant him his wish and before we knew it, Shahid was well on his way to hop on the local trains albeit a short distance late lastnight!!!

The movie directed by Imtiaz Ali, which will be hitting the screens on 26th of this month, is about two how two individuals set for a journey after they miss their train!

Well guess for now, Shahid sure did have a journey of a lifetime! 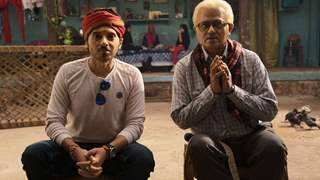 14 years ago He's such a cutie<3.
Man screw kareena.. she looked like she was his older sister if not his mother! now he can enjoy youngER women=]

+ 4
14 years ago tfs...hes luking so cute n i love his smile...keep smiling shahid coz ur fans smile lies in ur smile...

+ 5
14 years ago Man he is really hurt with bebo seperation....dont worry shahid. i will take care of bebo..:)