View Profile
Shahid Kapoor, a trend setter of some sorts, is known for doing some very unique things, be it for his performances or for his movies. This time around he has gone to a whole new level and has decided to become a pilot, and not just for any old plane but the one that no actor has ever got the chance to sit in!
It has been confirmed that Shahid will be participating in the Aero India 2011 contest that is being 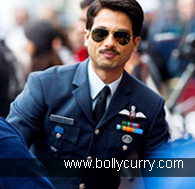 held in Bangalore on February 11th. He will notibly be the first actor in the whole world to be flying an F-16 IN Super Viper fighter plane, one of the fastest planes ever. Before him, Ratan Tata was the only Indian to be allowed the privilege of flying the F16.
Shahid has been said to have gone through rigorous training the last one month and will continue to do so until his flying date. Along with the training, he had to go through a few medical tests to make sure he did not suffer from motion sickness and can safely fly at high velocity. Fortunately he has passed most of the tests and only a few remain which will take place in the upcoming days.
Before the competition, Shahid will run a flight stimulation test at the Indian Air Force Station Yelahanka where he will run through a mock up the competition day itself, almost like a rehearsal.
This is a great opportunity for Shahid to learn the different aspects of flying a plane since he plays an Air Force pilot in his next venture. Mausum, directed by his father, the renowned actor Pankaj Kapoor, stars Sonam Kapoor opposite him.
Just like his career is on a high, here's hoping Shahid has a great time being up in the sky!