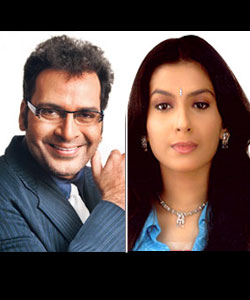 Rakesh Paswan, the man behind Baba Aiso Varr Dhundo is gearing up to produce a new show for Zee TV. To be known as Afsar Bitiya, this unique show's promos are already making waves around the viewers.

The show is about a girl who has an urge to get educated and her struggle to get successful in her life. Sanghmitra Hitaishi is going to be seen as Sharda Kumar, an I.A.S. officer and is visible in the promos which are currently running on Zee TV.  Similarly Gargi Sharma of Zee Cinestars Ki Khoj will be seen as a doctor. We also hear that Shahbaaz Khan who last seen in Looteri Dulhan has been roped in to essay a pivotal character in the show.

We contacted Sanghmitra Hitaishi who confirmed, "Yes, I have done the promo and it was a good experience to work for the promos of such an inspirational show."

On contacting Gargi Sharma, she too confirms.

All our efforts to reach shahbaaz Khan were vain.

+ 4
9 years ago Related shows for this story should be Luteri Dulhan, where Shahbaz acted

9 years ago please give the name of male & female star cast of this show.