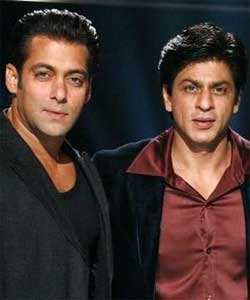 Shah Rukh Khan we know is all geared up for his comeback on television with Imagine's new reality show, Zor Ka Jhatka launching on February 1st at the 9 PM slot..

We hear that the inaugural episode of the show will have SRK taking a dig at Salman Khan, who hosted the recent season of Bigg Boss on COLORS..

An insider tells us, "Going by the concept of the huge balls used as hurdles in the adventure sport, Shah Rukh in the first episode was heard repeating the dialogue 'Welcome to Big Balls', imitating the style in which Salman used to say, 'Welcome to Bigg Boss'".

What's more? SRK expresses that he is excited to have his 'Kabreena' beside him, just as Salman has Katrina with him!!

Oh well, do you want to know who is SRK's Kabreena? Well, she is the vivacious and talented ground host of Zor Ka Jhatka, Saumya Tandon..

Well, we are so looking forward to being entertained by SRK and of course, his Kabreena too!!

chahat4u 9 years ago SRK trying to be a hit on TV, with indirect support from Salman Khan!!! great. just proves Sallu is better host.

salmankhanrulz 9 years ago srk n da show organisers know dat every1 likes salmans style so they will try to imitate salman...nething dat is connected to salman gets fame

sexypink 9 years ago Shahrukh is jst a publicity piece... Its nt dat salman is da best buh he neva degrades shahrukh at public places. If it ws a matter of script as if he is illiterate, he can read nd say dat he doesn't wnt similar dialogues as salman cz he doesn't wnt 2 create differences or msundrstndngs btwn hm nd salman...
I totally agree wid bips all stars act lke babies................................

exclusive
Exclusive Jaan Kumar Sanu on keeping up with Bigg Boss 13, looking up ...
3 minutes ago

Subuhii Joshii loses weight all by herself
10 minutes ago

Deepika Padukone Arrives at NCB, to be Questioned over ...
59 minutes ago