This Sunday, October 4, the Badshah of Bollywood Shah Rukh Khan is back on STAR Plus. This time as a guest on the chat show Tere Mere Beach Mein. Host, Farah Khan makes a vibrant  entry and introduces the nominations for the best Pati's or Joru Ka Gulaam award  on this Sunday's episode of STAR Plus' Tere Mere Beach Mein from 9 to 10 pm. 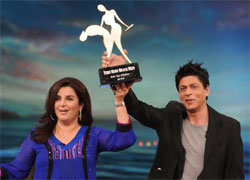 Featured Video
The nominations are: Abhishek Bachchan for Aishwarya Rai Bachchan; Anil Ambani for Tina Ambani; Hrithik Roshan for Suzzane; Sachin Tendulkar for Anjali; Akshay Kumar for Twinkle. But the Award  instead  goes to  the one & only- Farah's best Friend and the King of Bollywood – Shah Rukh Khan...

Farah congratulates SRK and presents him the trophy, SRK admits  shyly that he likes all sorts of awards and he is over 40 years now but is very thankful to all for giving him this award as he has been wishing to receive this for a long time! SRK thanks God and his mother for this award and shares that it is actually his mother who made him capable today of receiving this award.

SRK admits that it was his mother who taught him how to be a 'Joru Ka Ghulam' like his father. He thanks his parents for finally recieving the award and adds in his remarkable witty style,  "Wife ko main thank publically kabhi nahi karta hoon, roz subah uttkar main unke charan (feet ) paani se dhokar peeta hoon! "

Catch all the masti with SRK unplugged this Sunday, October 4, on STAR Plus' Tere Mere  Beach Mein from 9 to 10 pm

13 years ago awww i love SRK..cant wait to see this epi=D

+ 5
13 years ago i jst love my shweeetooo srk! cant wait for my name is khan and this epi! luv u u totally rock!

....tmbm is gonna rock wid him