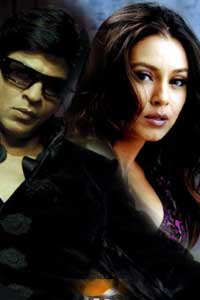 Featured Video
topics these days. We repeatedly hear about stories of scuffle among Khans and cat-fights between actresses. But, we by a hair's breadth knew that Shahrukh Khan shared some sort of battle with Mahima Chowdhury. It came into front position when King Khan uncared for Mahima at a recent award function.


It was an award function organized by Bharat and Dorris Godambe at Hair and Make-up Week at J W Marriott in Mumbai.


The award function that aimed at recognizing the length of talent in the make-up and hair segment in the country.


In attendance at the function were big stars like Juhi Chawla, Kareena Kapoor, Ayesha Takia, Jaya Bachchan, Sonu Sood and the listing goes on. Shahrukh made his impressive entry as always and he greeted everyone very harmoniously. But, he decided to ignore Mahima. She even stood up to make the acquaintance of him but Shahrukh didn't even look her way.


If we evoke, Shahrukh and Mahima formerly pooled screen space in the smash hit 'Pardes'