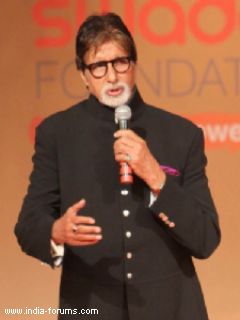 Amitabh Bachchan has travelled the world, meeting cinema icons from all over. He feels happy at the growing reach of Indian movies and says younger stars like Shah Rukh Khan, Aamir Khan and Salman Khan deserve the credit for realising their potential globally and pushing it in the world.

Of course, filmmakers like Satyajit Ray, Bimal Roy and Mrinal Sen as well as actors like Raj Kapoor meandered their way into hearts across boundaries with their craft, but the visibility of Indian films - Hindi and regional - currently seems to be at an all-time high.

The movies are not just getting screen space at international film festivals but are also getting theatrical releases in an increasing number of non-traditional foreign markets like Peru, Panama and Morocco.

That gives Amitabh, whom French director Franois Truffaut once called a "one-man industry", a reason to cheer.

"Internationally, it is very heartening to see the interest in Indian cinema," the 71-year-old told IANS in an interview here.

Going back in time, he said: "For many years in the time when I started, cinema was not marketed or promoted the way it is now. We didn't know about these markets. There were international distributors, but we never knew exactly what used to happen to a film - we used to give it at a pittance because we never realised that people outside would want to watch a Hindi film or any Indian film.

"But once it began, we found the importance of the number of people that are seeing it. The international market has now become a major territory. It bodes really well because there's a large expatriate audience and they have passed on their likes to their friends, and therefore this whole community, even foreigners, have started identifying with our films."

The actor, who made his debut with the 1969 film "Saat Hindustani", remembers having performed to a packed audience at London's Wembley Stadium and at New Jersey's now-demolished Giant Stadium in the 1980s and 1990s.

"We used to have a stadium full of people where we used to sing, dance to numbers of the Hindi film industry - filling up the Wembley Stadium of 65,000 people - it was immense - New Jersey - 75,000 people. I saw the amount of love, affection and interest and that was really a revelation for us.

"But somewhere the generation that came immediately after us - Shah Rukh, Salman, Aamir and (filmmaker) Karan Johar too - they pushed this potential into the international world. So if you want to give credit for the recognition, these are the people who should be credited," Bollywood's once 'Angry young man' told IANS.

He added that it is because of works like "Kabhi Khushi Kabhie Gham", which "became an iconic film in the western world", that it was found that Indian films had a potential abroad.

"Shah Rukh is as popular in Germany as he is here, Hrithik (Roshan) and Salman and Aamir are loved internationally in equal proportion. So, obviously Indian cinema is doing well.

"The fact that there are festivals that invite our films and personalities and stars, is also wonderful. Marrakech, Cannes, Berlin, US, Britain...that's wonderful," said Amitabh, who is due to attend the Melbourne International Film Festival towards the end of July.

Delnaaz Irani speaks about entering Choti Sarrdarrni, her ...
a minute ago

Madhrima Tulli & Ssharad Malhotra starrer “Pasta” gets an ...
20 minutes ago

Kareena Kapoor Khan’s 40th Birthday: Inside Pics give ...
37 minutes ago