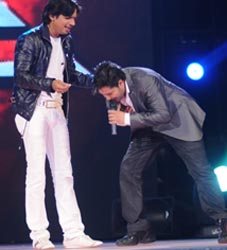 According to our source, "Vidya Balan had come as a celebrity guest on the show to promote her film Ishqiya. Mika surprised everyone by saying that he considers Vidya as his sister. Don't know what got into him but he persuaded Shaan also to go his way. This was followed by another surprise where Shaan refused to do so. Everyone was baffled with Shaan's reaction!"

Adds the source, "Shaan later cried. No, not because Mika punched him but because of Anvesha and Debojit's performance. This is where a truly shocking thing happened. when the duo sang on the evergreen number Tere Mere Milan Ki Yeh Raina. Mika came to console Shaan in spite of getting offended by him."

The source further tells us, "Apparently, it was Debojit's wife's birthday on the same day and all the captains sang for her."

Catch this episode of Music Ka Maha Muqqabla on Star Plus this Saturday, January 30, 2010 at 9.30pm IST.

12 years ago Can any1 pls explain What this article implies?? Beats me !!!

+ 2
12 years ago what is the point of this? i don't get it. sometimes I feel like trashing india-forums for their stupid articles.

+ 4
12 years ago Lol thank god Iam not the only one who did not see the point of this article...

12 years ago Hahahah.. where is it leading.. how stupid.. attention-seekers!!!

12 years ago wat de hell? lolllllllll wats de pt of this article??:-s stupid author needs to get english classes for sure!