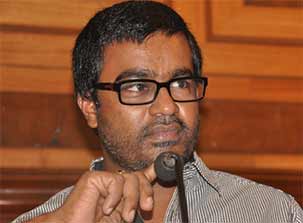 Lauding filmmaker Selvaraghavan, who is awaiting the release of Tamil fantasy romantic-drama "Irandam Ulagam", the film's leading lady Anushka Shetty said he has the knack of extracting the best out of his actors.

"Selva is usually regarded as a tough director, but he knows how to extract the best out of his actors. Therefore, if an actor in his film is lauded by critics and audiences, the due credit goes to him. He may be tough, but we didn't feel the pressure," Anushka told IANS.

"I was little worried that I may not live up to his expectations, but everything went on smoothly and it was indeed a pleasure working with him," she added.

In "Irandam Ulagam", Anushka is paired opposite Arya for the first time. It's a love story set against the backdrop of two different worlds.

"It's not your usual love story but something the audience has not experienced so far. Selva's touch to the love angle along with the breathtaking visuals will definitely make the film an unforgettable experience for viewers," she said.

Shot predominantly in Georgia as well as Hyderabad and Goa, the film is produced by PVP Cinema and is slated to release Nov 22.