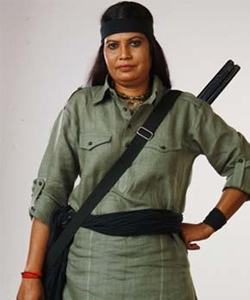 Sony TV has always experimented with their way of programming in the genre of crime and thriller and keeping to their tradition, the channel is all set to bring in their unique show Prayashchit. The promos have already hit the screens which have put the viewers in an urging situation to watch the series.

The show, through which the sinners seek their forgiveness, will feature none other than the infamous Seema Parihar who was last seen in Colors' Bigg Boss 4.

A source says, "The episode will show an enacted version of Seema Parihar and her life at the end of which Seema Parihar will personally appear in the show."

TellyBuzz contacted Seema Parihar and she said, "Yes, I am coming in the show and that is all I can say now."

Prayashchit will be launched from 9th September and will replace X Factor India which will see its finale on 2nd September.

We also hear that Prayashchit is a six week show.

+ 2
9 years ago Sony's response to Color's Phulwa? Will be interesting to see Seema.
Good luck to her.

+ 4
9 years ago Aen, now seema is all set to enter television.

+ 4
9 years ago OMG good to see seema G after alooong time.. i really want to see her playing da role of shweta's mother in any serial.. i simply loved their duo in Bigg boss.. hope she do some serial with her..!!!