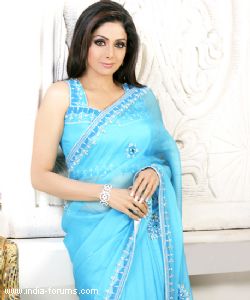 Aamir Khan's Satyamev Jayate has caused quite a stir and has found its way to the viewer's heart. The show deals with social perils and sensitive issues. Last week the show was dedicated to female infanticide and this week the show will deal with the sensitive issue of 'Child Sexual Abuse'.

Sridevi Kapoor will be the guest for the episode. The story revolves around a boy who was sexually abused by his relative. The boy gathered the courage to disclose the ghastly truth to his mother but she refused to believe him, plunging him into despair. His sole confidant was his dog and watching Sridevi Kapoor movies was cathartic for him. He eventually moved out of the house.

We hope Satyamev Jayate once again manages to deliver the message effectively to the population of the country and is able to bring about some reform in the society!

bhakti2 8 years ago Really proud of Mr Amir Khan that he would bring such a show - in my house the tears were rolling during the whole first episode - i am sure we will watch all epis with interest. I hope everyone would watch and insist that some changes come to life in our country - it is very good the way Aamir ji is able to show the terrible problems we must face but still bring out the greatness that can be in Indian society.

AnnieHK 8 years ago Really Amir Khan, you are one hell of a TRUE INDIAN! Proud of you.. Satyamev Jayate is sure to bring about a change. Love you. Every Indian is standing with you sir.. Believe me :)

hyla 8 years ago this show is really gud...i love it...it should be continued...love you amir...hatsoff for your wonderfull step...

anji-mira 8 years ago Hats off Amir, in this entertaining world , nobody had thought about such shows. you made it and it will rock. very touching , I am proud of you.

minihussain 8 years ago the first episode got my attention...lets see what amir does in the second episode..i have a feeling i am becoming a fan of this show... :)

goguma 8 years ago this show is really an eye opener.
shocking, sad but its happening..

its a wake up call for everyone..

cs-07 8 years ago dont commercialise it ! why sridevi ! she is a shameless womanwho got pregnant with her rakhi brother ! she is not a role model!