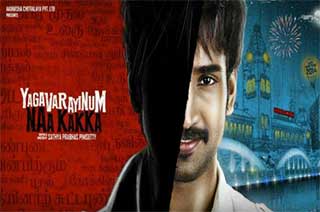 Director Sathya Prabhas Pinisetty says he "followed the script" and shot his upcoming Tamil-Telugu directorial debut "Yagavarayinum Naa Kaakka", inspired by true events, in over 100 locations in the country to keep the narrative "authentic".

"We shot the film in Bombay, Goa, Pondicherry, Hyderabad and Chennai, but the total number of locations explored in these cities are more than 100. It wasn't any of the exotic locations, but something more realistic like Pudupettai, two fishing harbours and the VT station in Mumbai," Sathya told IANS.

"I had to constantly shift locations in a city. There are two ways of doing it. You can either cheat and do it according to your convenience by compromising on the ambience or take your time and convince your team to go where your script takes you," he added.

Starring Sathya's brother Aadi Pinisetty in the lead, "Yagavarayinum Naa Kaakka" went on the floors in February 2013, but it was wrapped up only recently.

He says the delay was due to the script requirements.

"The nature of the script was such that I had to change about 140 locations. The story revolves around four characters in four different parts of the country and I wanted to keep it authentic. Therefore, I didn't want to compromise creatively," he said.

The team now plans to go to Bolivia to shoot a song.

"We might go to Bolivia to shoot a remaining song. There's a place there which I thought was fabulous, but I'm not sure if it's still the same. We are doing a weather check and if we can't make it, we'll shoot it in India," he added.