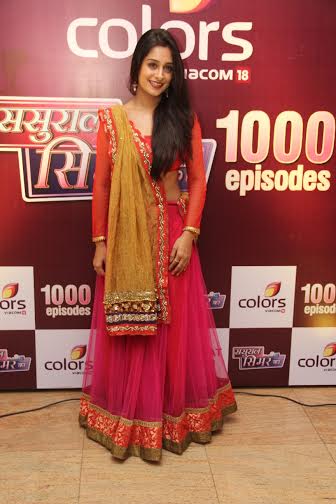 Rashmi Sharma Telefilms' show Sasural Simar Ka on Colors has completed its 1000 episodes and the show's lead Dipika Samson's acting has been appreciated immensely by the masses as she has been associated with the show since day one, Dipika shares a strong connect with the show and also have a few memories from the show.

In conversation with TellyBuzz Dipika talks about her journey, playing different shades and more...

Praising the efforts of the team Dipika says that the dedicated team is responsible behind the show's success, "There is no definition of my excitement right now as reaching 1000 episodes is very big achievement in itself. I just cannot describe this journey in words, it has been a team effort. A daily soap cannot reach success if the entire team is not best."
Dipika is glad to try her hands on portraying different characters through this show, "I think as an actor that's a best opportunity I have got throughout this show. While doing a daily soap many stars complain of doing same kind of role and feeling bored with it but thankfully this is not the case with me as Simar I have tried my hand on different characters."
Simar's character is very convincing and women oriented and Dipika admires the same, "I think Simar is perfect Bahu when it comes to her family, she knows how to respect elders and at the same time when she has to teach someone a lesson she knows how to do it. I think that's something which comes across very well to portray a message that women is not the one who can tolerate anything and she knows to fight back."
Talking about her bonding with the co stars Dipika says, "I think its quite good and obviously I am closest to Avika Gor because we have been together since day one and she is actually like a younger sister. I still remember the days when we were shooting the Vrindavan portion. She and my younger brother Gautam used to actually fight a lot ."
She concludes by passing a message to the followers and says, "A very big thank you specially to the India-forums fans. I do keep reading all the messages and updates that they send and I think without their support it would have been impossible to achieve this place."

We wish Dipika all the very best!
Phalguni Sharma
10 Likes

LovelySweeti 6 years ago Love u my DIVA Dipika Samson

DiptiShoaib 6 years ago Dipika Samson love u my SUPERSTAR

. U R ROCKING AS SIMAR