Looks like Ram Gopal Varma's 'one of a kind' cinematic sensibilities have flown out of the window. 'Sarkar Raj' is laden with star 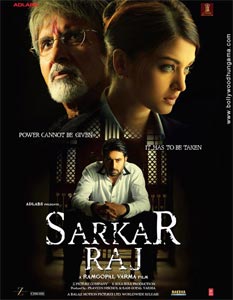 Featured Video
power and some good characterizations, yet it's not impressive enough.

'Sarkar' was a landmark film of the year 2005. But the sequel can hardly be considered an apt follow-up. Maybe making the sequel wasn't a very great idea after all (is that why creatively crazy Ramu has been telling the world that the film's not a sequel?).

Now no one's yet doubting his capabilities as a filmmaker though! He was an avant-garde filmmaker of his times with movies like 'Satya' and 'Company' to his credit!

Untill creative diarrhea happened to him and he decided to churn out stuff like 'Ram Gopal Varma Ki Aag' and 'Shiva.'

'Sarkar Raj' takes off where the earlier movie ended and has similar half lit settings (which becomes irritating after a point)!

Shubhash Nagre (Amitabh Bachchan)'s power regime in Maharashtra has happily continued. His Bal Thackrey inspired 'father of Maharasthra' character has come to terms with the death of his elder son (Kay Kay in the earlier film) and is satisfactorily doing his duties towards the people.

Abhishek's Shankar Nagre has aptly taken over his father's mantle (as shown towards the end of the earlier film) and is married to the homely Avanatika (Tanisha).

The family rules the hearts of happily citizens.

Until Aishwarya Rai's power woman character enters! She is Anita Rajan whose multinational company is looking at building a huge power project which would cover some rural areas of Maharashtra.

The problem is that the project would make a million families in the surrounding villages homeless. That leaves the ground open for the start of a struggle for supremacy between the Nagre family, the various power brokers and political pawns.

The actual condition of people and the environment in Mumbai and Maharashtra's villages has been explored well in the story and a whole lot of things appear very very authentic!

Wish Ramu hadn't loaded the story with unrealistic things like the abrupt beginning to the Abhi Ash dosti. Just after the first meeting, Abhi is mighty impressed by Ash's project and Ash of course. So much so that she joins him as he tours a dozen villages of Maharashtra.

Looks like Ramu was seriously trying to cash in on the miya biwi real life pyaar.

Also unrealistic are the murders happening left, right and center. Wonder what happened to the law of the land!

In the Godfather, The Corleones were a mafia family, so the bloodshed was kind of justified. But for God's sake, this is a political family based in the heart of Mumbai!

The way the wife gets killed by the car bomb (which was meant to be for the hubby) again reminds one of the 'The Godfather' effect!

Amitabh Bachchan yet again delivers a flawless performance and Ramu quite literally gets what he expects from an actor like him. Abhishek essays the Shankar part pretty well, as well as in the previous film.

Their chemistry of the father–son jodi is heartwarming and excellent.

Same can't be said of the Abhi-Ash chemistry though, which comes across as superficial. Ash looks the sophisticated corporate women's part and her beauty shines through here, too. Only the characters looks jumbled up as from a steely foreign bred business woman, she turns into a big sympathizer and 'too close a friend' of the Nagre family. As a whole, she doesn't really come across as a strong character (the way it was portrayed in the media by Mr. Varma!)

Tanisha looks the Maharashtrian wife's part but as guessed by many she has very little to do. Supriya Pathak is amiable as in the earlier film. Rukhsar( the elder bahu)'s and her little son's characters just get mentioned here. But the mention of their names very well leave the option for another sequel open!

There is a gamut of good character roles written in the film and the character actors from Upendra Limaye ( Vora), Dilip Prabhawalkar (Rao Sahab) to Bala (Sumeet Nijhawan), Sayaji Shinde (Karunesh Kaanga) and the Raj Thackrey kind of character stand out. They make the otherwise confusing proceedings quite interesting.

The entire premise of the movie is mighty dark and depressing and there's a hell lot of violence happening around. If you're a fan of feel good movies, this ain't your cup of tea.

The cinematography (by Amit Roy) is again Ramuish (you can almost categorize it as that, after all these years, especially post 'Sarkar') but there are a lot of haphazard and out of focus shots (must be all for the sake of Ramu's 'over' creativity).

The music doesn't have a great role in a film like this one, so that way, it's alright. They try to cash in on the 'Govinda Govinda' track here too. Though the effect isn't the same this time around! The background score is decent (and almost similar to the earlier film).

If you are a huge fan of the Bachchans and intricacies of a political power struggle interests you, this movie sure is a one time watch!