Zee’s SaReGaMaPa will now face a format change in Challenge 2009. The show which usually believed in following the Chakravyuh pattern will now have a different pattern for elimination. Last week, three contestants, Tarun, Faraz and Shayon, who received the Sanjivani bhooti had to wait for the results as the mentors couldn’t decide whom to be awarded the Sanjivani bhooti and brought back in the contest. This week will see all the three contestants racing up with other contestants as the mentors decide to get them back in the contest. But there is a twist in the tale. 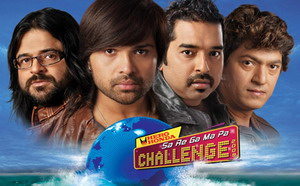 Featured Video
Shankar Mahadevan reveals the format exclusively to Telly Buzz. “There are totally 20 contestants left in the show. These twenty will now be divided into a group of two with ten contestants in each group performing on Friday and Saturday respectively”.

On asking if the format change was required, Shankar quipped, “It was more required for the mentors and audience to connect with the contestants. Till now the format was such that mentors and audience got to listen to a particular contestant only after 2 weeks. We listened to a contestant in the first chakravyuh round and later we got to listen to the same contestant only in the next chakravyuh round. So, basically the connection is lost and it was necessary that we get to hear them all together, so the final decision could be taken”. So, what about other contestants who have been eliminated so far? “They are not going to come back as of now. But yes, they do have a chance of getting back via Brahmastra round”, quips Shankar.

Wonder who the lucky contestants will be, to get thro’ to the Agnipariksha Round!! To know all this and more, keep watching SaReGaMaPa on Friday and Saturday at 10 PM only on Zee TV.

13 years ago it will be interesting .. thanks anuradha ..

13 years ago i just want to say that adhity u r doing gr8 job keep it up
can i have your e-mail address.

13 years ago yeah It seriously needs a format change

+ 4
13 years ago thank god Sayon is safe!!!
but 4 contestants being eliminated a week? wow...thats kinda...ughh idk =[
its still kinda confusing but i get the two groups thing.

13 years ago Cool...
Another change in a format

13 years ago thanks!!
Now i understand the new format!!!

13 years ago thanks... great, now i have understand the new format, just when i got used the old one.. haha!