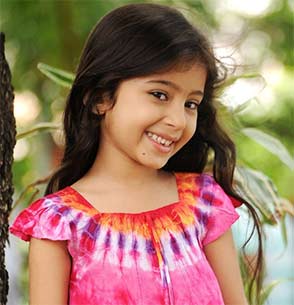 Child artist Sara Arjun is the real star of upcoming Tamil family-drama "Saivam", says its director Vijay, who is completely in awe of the little girl's performance.

He has already worked with her in his film "Deiva Thirumagal".

"She has transformed herself so well since we worked the last time. She is the hero of 'Saivam'. She's the real star of the film. When you see the film, you'll realize that she carries the story on her shoulders. I'm sure she's going to floor the audience with her performance," Vijay told IANS.

"Saivam" is about the relationship between Sara and her pet fowl named Papa, and the events that unfold in her village following Papa's disappearance.

"It's a family drama at heart. The story will instill lost family ethics in the audience," said Vijay.

Also starring Nasser in the lead, "Saivam" introduces a host of newcomers such as Baasha, Twara Desai, Rahil and Ray Paul in important roles.

Sara, who has also worked in Hindi films "404" and "Ek Thi Daayan", has starred in several TV commercials.