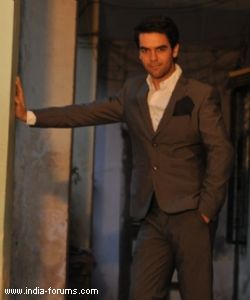 It was last reported that Sanjay R Gagnani made an exit from Colors' Hamari Saas Leela as there was not much of development in the character.

But the latest we hear is that the actor has bagged another role in Star Plus' afternoon show Hamari Devrani.

A source says, "Sanjay will essay the character called Ayush, the elder son of Manjula, the eldest Bahu in the family. Ayush is a US return and would like to settle down in India permanently with his wife and younger brother, Tejas, who has his family already in here. He also intends to start a business with Tejas."

TellyBuzz contacted Sanjay and he confirmed saying, "Yes, I am doing Hamari Devrani and I have started my shoot since two days. I am fortunate to do something again in television because it is just less than a month that my track in Hamari Saas Leela ended and I am doing another show."

Let's see how the track develops in the Star Plus' show…

debarshi_genx 9 years ago These kind of shows get viewers????

sidhu24 9 years ago I love this show so much. Thanx for this article

CookMySock 9 years ago They are desperately hanging on for viewers! Just end this show and spare us the torture!

ScoopTroop 9 years ago dis is most bakwaas show on tv... SP needs to pull dis show off asap

-Rinki- 10 years ago Ah Its so sweet of him that he thinks like that...But it surely is True!;)

Davide 11 years ago No Entry is not David Dhawan movie,please correct the mistake.

-Preeti- 11 years ago hes one of the real good directors ..love watching his movie

'Naagin 5' To Welcome Two New Entries in The Form of Karan ...
30 minutes ago