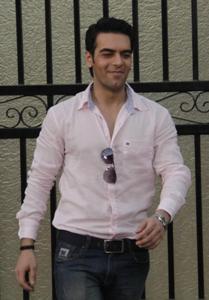 Sanjay R Gagnani has come a long way in the small screen industry and it seems it's time for him to have his first B-town Ride. Thus, his celebration to see himself on the 70 MM screen has already begun.

Talking about his first movie, a source informs, "Sanjay would soon be seen in the movie titled Rakhtbeej which is all set to release this April, as a parallel lead. The film is produced by Sai Jyoti Films and directed by Anil Ballani. The supporting cast has known names like Rajesh Khattar and Yatin kelkar."

Sanjay was last seen in Star Plus' Hamari Devrani as Ayush.

A source continues, "Tinu Anand will also play an important character in the movie. Along with it, Rakhi Sawant has shot an item song."

Sanjay merrily confirmed, "Yes, I am fortunate to be a part of this film which boasts of known and senior film actors. By god's grace I am playing a parallel lead in my film debut. It's like a dream come true. I would like to give all the credit to my living gods that is - my parents for being so supportive. I always dreamt big but the fuel to it was provided by my parents. Without the support and encouragement of viewers I wouldn't have climbed the steps to the 70mm screen."

9 years ago All d best n hope u hv a successful career :)

9 years ago All the best Sanjay and may u achieve all the goals that u have set for urself and excel.