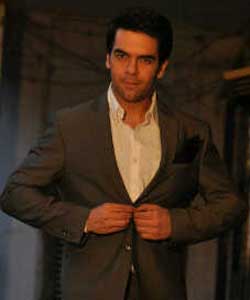 Sanjay Gagnani after his debut film Rakhtbeej was last seen in Colors Hamari Saas Leela and the sources say that he will be playing in Madhur Bhandarkar's next upcoming flick Heroine.

One of the sources when contacted confirmed the news by saying "Sanjay would essay an important role in the movie Heroine where he would play Bollywood star like Ranbir Kapoor, Imran Khan in the film. First schedule has already come to an end and the other one is still on". On hearing this TB contacted Sanjay Gagnani who says" It was great working for the movie and sharing screen space with Arjun was great. he is really a cool guy and supportive on the sets and my childhood dream of sharing screen space with Kareena Kapoor got fulfilled with this film though it's a cameo it's a great opportunity to work with one of the coolest and best director Mr. Madhur Bhandarkar in Bollywood also my debut as one of the lead character, Rakhtbeej is going to release in may so looking forward to a good innings in Bollywood with the love of viewers and blessings of my parents and well wishers."

Well, Sanjay is surely adding an extra feather on his cap and hopefully to see him shining in Bollywood. Tellybuzz wishes him all the best in future.

mihali7 8 years ago 'my childhood dream of sharing screen space with Kareena Kapoor got fulfilled' - u have to be kidding me she is only 31 and ur prolly 25 tht is NOT ur childhood!!!! grow up

icegirl31 8 years ago All d best for his innings in Bollywood :)

sanw 8 years ago so another actor in heroine. 1st bwe had news of raqesh

anand yadav 10 years ago AJAY you really did a great, marvellous and fantastic job in both the movies "ALL TE BEST" and "LONDON DREAMS". You are the real KING and BADSHAH of bolywood.'You always go on doing best movies and superb actings in all the movies. My best wishes are always with you.

1toka4 10 years ago acted amazing in ALL THE BEST...loved him in that movie...too funny

Sadda Haq Actor Harshita Gaur gears up for the release of ...
16 minutes ago

Ranveer is Fulfilling his Husband Duties towards Deepika? ...
35 minutes ago