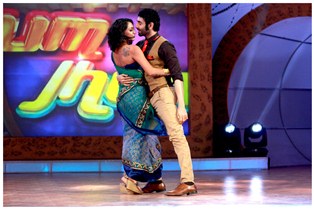 Doordarshan's dance reality show Bharat Ki Shaan-Rum Jhum is becoming a very popular show of this season. Episode after episode it is bringing surprises on the dance floor. Its unique concept of Indian dances v/s Non-Indian dances has caught on with the reality show audience.

On one side, Kathak Guru Sandeep Mahavir brings out the various Indian forms on the floor and on the other hand, Ballroom and Latin King of India Sandip Soparrkar makes his contestants sweat it out by putting world class international dances on the stage of Rum Jhum.

Guru Shreshtra of the show Sonal Mansingh is always speechless with the dynamic performances of the contestants. Full credit goes to Sandip Soparrkar for introducing new dances from various parts of the world each time in each episode. The man really has vast knowledge in this field of dance. Sandeep Mahavir also puts forward different Indian forms, be it folk, classical, semi classical and even Bollywood in exceptional ways.

This week's episode of Rum Jhum was one of the best when the international dancing sensation Sandip Soparrkar got up and showcased a sexy and sensual salsa with the host of the show Shveta Salve. Shveta who is till date remembered for her perfect moves in Jhalak Dikhlaa Jaa : Dancing with the Stars, looked even better dancing with the maestro of Ballroom dance. Sandip and Shveta's association goes a long way when she was the contestant on Jhalak and Sandip was its technical judge and director.

It is not very often that the dance Maestro gets up and dances with other partners other than his super model wife Jesse Randhawa. To see him on the dance floor sizzling and sharing the chemistry with Shveta Salve was a visual treat. The two fantastic dancers grooved to the music on the sets of Bharat Ki Shaan - Rum Jhum and made the episode a worth watch. We hope with this we get to see more such mesmerizing dances by the Non-Indian team Guru Sandip Soparrkar.

Doordarshan's attempt to bring both Indian and Non-Indian dances on the same platform has been very successful, thanks to vision and concept of producer of the show Gajendra Singh of Saai Baba Telefilms.

Sandip Ssingh Files a Defamation Suit Against Those Spreading 'Fake' ...