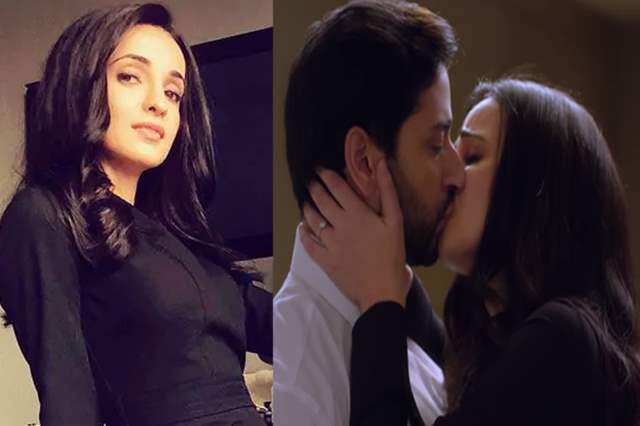 Actress Sanaya Irani may continue to have her television comeback be awaited but she has certainly been in some of the most interesting projects in the past couple of years that includes some short films and web series. And now, Irani is all set to make her Bollywood debut with the upcoming film, Ghost.

With this film, this is not only the actress's first stint on the big screen but she will also be seen kissing on-screen for the first time. Having had her maximum stints on TV, the actress hasn't been associated with doing bold or kissing scenes. So, this indeed will be the first time for her on-screen.

In an interview with an entertainment portal, the actress was asked about the same. Irani mentioned how kissing is so normal and natural between two people. She agreed that the kiss or any scene associated with physical intimacy has to make sense in the script. With their film, as it was a horror story, there wasn't much time on a love story. So, for a particular scene, the two characters, who feel for each other and need to be getting together, it required more than just standing away from each other, and it just organically happened for the story.

Well, that certainly makes perfect sense. Are you excited to watch Irani in her Bollywood debut? Leave in your comments below.

Sanaya Irani Pens Down a Heartfelt Note for people who lost their ...

bubulswt 7 months ago @Cshafkat oh so much Richie Rich in your dreams I am living in slum I not you to do that but yes I am very proud Indian slum or no slum but you are low life who is not happy in her real life and taking out your boring life frustration here why so interested in Indian show and actress. hahaha such a disgust.

ChickenSoup 9 months ago @bubulswt Yeah I'm doing far better in my life than you can ever think of doing in your shitty life. Of course you should go back to school but you can't because you shitheads live in slums and are far away from education. You Indian slumdogs are nothing but a waste of space. Brainlessness is what defines you fools. Try again!

Pinewood 9 months ago @Cshafkat what a logic lol. If unmarried / divorcee actors kiss on screen then it’s not vulgar, while if married actors kiss on screen, the movies look vulgar according to you! Instead of me, you should go check facts @Cshafkat ! In the Tellychakkar article dated 22 January 2018, Jennifer Winget herself says that the film Phir Se was shot in 2013 & she had a great time shooting for it in the year 2013. Jennifer was NOT at all divorced at that time! And as I said I admire Jennifer for all her works & there is nothing wrong in what she did. If only divorce can justify actors kissing on screen (like you are justifying here), then what about Mohit Sehgal kissing onscreen for his upcoming film ‘Badnaam’? 🤔 You commented here earlier that you feel bad for “poor” Mohit Sehgal as “he has to watch her kiss another man on screen” while I have already replied in my previous comment here that it was Mohit who was the first one to kiss another woman on screen in his upcoming film Badnaam (the shoot for which was completed sometime before Ghost in 2018) & this fact is already reported in that media portal. Mohit’s status is neither that of a single or divorcee! He is married, isn’t he? But you conveniently ignored that point as your sole motto is to bash Sanaya Irani irrespective of all logic!

ChickenSoup 9 months ago @Pinewood Yeah I still would say the same. Got it? Jennifer was divorced at the time she filmed Phir Se. Go check!

ChickenSoup 9 months ago @bulbulswt Wow you really think just because someone criticizes her they are jealous of her? You really haven’t learned anything in school. You poor little thing. I pity you and your lack of knowledge. Grow up and learn something in your stupid life. Thanks for proving my point once again.

Pinewood 9 months ago ‪@Cshafkat it’s clear you’re here to spread negativity against Sanaya Irani via multiple comments & here you said you feel bad for “poor” Mohit Sehgal as “he has to watch her kiss another man on screen” but perhaps you’re not even aware that it has been reported in Spotboye two days ago on 15th October 2019 (the media portal mentioned by this IF article is that one) that Mohit Sehgal himself has already done a kissing scene in his film ‘Badnaam’ produced by the same production house! So do you still feel pity for Mohit now? And one of my favourite actresses Jennifer Winget too in her 2015 film “Phir Se” had elaborate kissing scenes with Kunal Kohli. The videos are available on YouTube too! Would you say the same cheap things for all the actors who have kissed onscreen? ‬

ChickenSoup 9 months ago @Gabi9 Maybe you should come out of your shit hole and learn that just because someone criticizes someone doesn’t mean that they’re jealous. I would never wanna be cheap like her or anyone involved in show business.

ChickenSoup 9 months ago @bulbulswt Can't handle the truth can you? The truth is that she is cheap and her idiotic fans are even cheaper. Thanks for proving my point.

Gabi9 9 months ago Sanaya Irani 's beauty that captures your attention; personality which captures your heart. If you don't like Sanaya's work but why follow her article and write. You are the jealous of her popularity and fantastic, incredible successes.