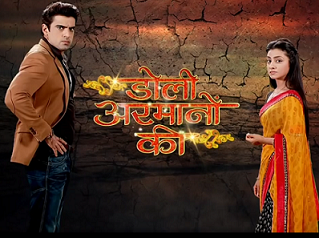 Spellbound Productions' popular show Doli Armaanon Ki on Zee TV is gearing up with an interesting track where Samrat will try to create problems in Urmi's (Neha Marda) life. As the audience has already witnessed that Urmi has left Samrat's (Mohit Malik) house after catching him red handed in a hotel room with his secretary now Samrat will create trouble in the life of Urmi.

Thus, in the ongoing track it has been shown that Samrat is trying to bring Urmi back but she denies. Not being able to control his anger, Samrat misbehaves with her and seeing this Urmi's brother Gaurav hits him. Now in the upcoming track he will try to create more problems in Urmi's life.

As per our sources, "Samrat will get an award for being the best Hotelier of the year. During the award function, media will come to take his interview and while interacting with the media, Amrit (Harsh Vasishta) will come and start insulting him. He will tell everybody that his wife has left him as she caught him red handed. Thus media will raise a question to know the reason behind his wife leaving him. This will make Samrat very furious and he will indulge in physical fight with media. Hence all the news channel will flash his misbehavior and will spoil Samrat's reputation.

"This will make him more angry on Urmi as he will think that because of her, his reputation is getting spoiled. Thus, he will go to a bar to hire goons, whom he will send at Urmi's house to trouble her."

What will be Urmi's reaction after knowing that Samrat has sent goons to trouble her?

arshisandhirian 6 years ago this story is so horrible ... such a dum script full of violence. ...I think makers dont hav brain y the hell the make such a stupid script. ... hate it to hell

Helena8493 6 years ago Is this really the way Indian families behave? I agree, the show should be banned. Maybe the writer has some serious issues, but please spare the viewers this rubbish!

suresh555 6 years ago Please guys get this sick show banned. One of the worst shows ever. Zee shouls lose their license. Where is the censorship??

latanzia 6 years ago This guy is an arrogant Ass, who does this to their wife and child.

iram4eva 9 years ago what is up with esha deol? for god sake girl take lessons from ur mom- she seemz to dress better than u!

enchanted. 9 years ago jacqueline and malaika looked the best according to me..