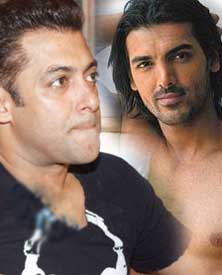 The cool dude of Bollywood, Salman has his own ways. He never forgives or forgets his enemies as we've seen in past. John is the lastest addition on Salman's bad list. The duo has not on good terms since the Rockstar concert and the recent link up with girl friend Katrina, has only aggravated the animosity.


Recently when Sony channel wanted to invite the team of New York on Dus Ka Dum, Sallu agreed but made it clear that Katrina and Neil are welcome but John Abraham is not. Buzz has it that Salman refused to even cordially talk with John. Seeing this deadlock only Kat and Neil came on the show to promote New York. This time its been reported that Katrina gets to play with Salman and wins Rs 1 lakh.


Would John's presence helped judge with whom Katrina had better chemistry? But such is life dearies!
Featured Video