View Profile
Another one bites the dust, or so it seems. First it was Sangeeta Bijlani, then Somy Ali, followed by Aishwarya Rai, and now Katrina Kaif. Once again, Salman Khan is in love.


Salman was quite low-low after his break up with Aishwarya Rai, until he found Katrina Kaif. After a series of hook up and break up, it is but natural of him to be really protective about his relation with Katrina. 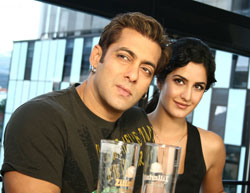 
In last five years, the pair has seen many ups and downs in their relationship but never failed to stand by one another's side. The best part of their relationship is, if they fight regarding some issue, the other moment they are together. Though they have done couple of films together but never exhibited their off-screen love on-screen, for promoting any of the films. They always try to cover up their liking for each other, from this precarious world where relationships are made to be broken.


Now we are lucky to see their fondness, closeness, love and attraction for one another in Subhash Ghai's Yuvraaj. The duo is at their romantic heights and both sizzles in Yuvraaj.