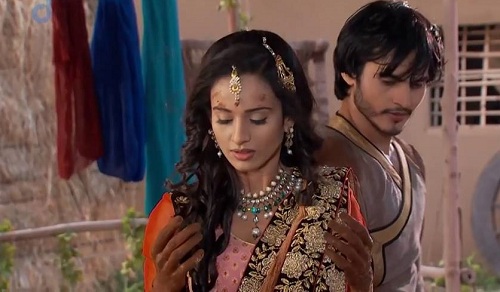 Balaji Telefilms' popular historical show Jodha Akbar on Zee TV has won millions of hearts with the presentation of historical incidents accurately and beautifully. Even after the leap the show has been liked by the viewers for the chemistry between Salim (Ravi Bhatia) and Anarkali (Heena Parmar).

As seen in the earlier episode, Salim has hidden his real identity from Anarkali (Heena Parmar) as he doesn't want her to know that he is the son of Akbar (Rajat Tokas) and is a prince. So he lies and tells Anarkali that he is Qutub who in actual is her friend.

Let's see what happens next in the tale -

+ 3
6 years ago the intense SaNar love story has begun..soo much in love with ravi bhatia and heena parmar :)

6 years ago Rajat Tokas you are a gem not found anymore! You rock!

6 years ago Rajat tokas, All the best, Keep smile, Stay Blessed.
JA Production team, kindly stop torturing viewers like this, as it is not fair at all!!!

6 years ago Rajat Tokas, you're an exceptional actor! Very proud of you!

6 years ago All the best for your future ventures Rajat Tokas !! Stay happy always!!

+ 4
6 years ago rajat tokas ur the ultimate definition of acting. wishing u all the luck for ur married life & ur career.