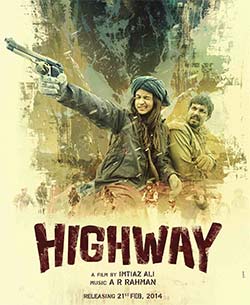 Sajid Nadiadwala is a very happy man with Imtiaz Ali'sHighway turning out to be a super hit and  profitable for all stakeholders. The Alia Bhatt-Randeep Hooda starrer, presented by Sajid was made at a cost of Rs 18.25 cr (including P&A). The movie has already clocked more than Rs 27 cr at the Indian box office and and is still running successfully across theatres. What is even more incredible is that the film has garnered this collection from just 800 screens where it was released. That apart, the film had made Rs 15.5 cr revenue even before release and the international theatrical collection is more than Rs 8 cr till date and still counting, making the total revenue pie more than 50 cr.

Says Sajid: "It was both an honour and a challenge when Imtiaz entrusted me with the big responsibility of Highway's release. We worked with our distribution partners at UTV to give a the film an appropriate release across 800 screens with carefully selected cities and cinemas across the country."

The film, with Anil Mehta's unmatched cinematography and A.R. Rahman's unforgettable music, has created a very strong word of mouth wave in the audience all over.

"Highway was always a profitable film, made and marketed at a tight cost but what was really heartwarming was the way the audiences warmed up to the movie," adds Sajid. "We not just made a super hit film but a much loved one which will be seen and remembered with much fondness for years to come."

Says Imtiaz Ali, "Happy that the film has reached the audience. We are moved by the response and very thankful. This experience has taught us many new things."