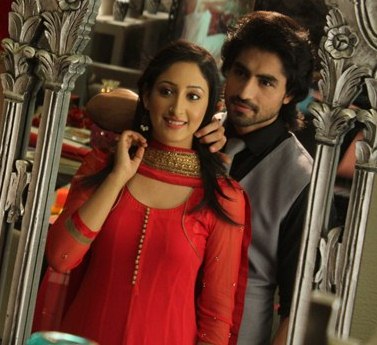 The relationship between Sahir aka Harshad Chopra and Arzoo aka Shivya Pathania in Sony Entertainment Television's Humsafars is one roller coaster ride of emotions. Their marriage which started off with hatred for each other soon turned into caring and now viewers will finally be able to see their favorite on screen jodi share some romantic moments.

After Sahir was shot by a masked man, Arzoo will be seen taking care of her injured husband. During this drama, Arzoo will also come to know a well-kept secret of the family.

Yes, in the upcoming episodes, viewers are in for another shocker! It will be revealed that Alvira is not Sahir's mother. She is, in fact, Zeenat's mother and hence Sahir's mother-in-law. When Arzoo comes to know about this, she will be completely taken aback. She will be seen having a heart-to-heart chat with Sahir about it.

During this conversation, Sahir will be so overwhelmed with emotions that he will try to kiss her! The duo will also be seen sharing another sweet moment when Arzoo will make noodles for him which he will lovingly relish!

+ 2
6 years ago God bless you Harshad Chopra, we love you!

alkaoberoi 6 years ago Oh!good at last has production of Humsafars understood what we want. Harshad u rock in ur every serial. U both r gorgeous. Luv u God bless u:)

somvssut 6 years ago After a long time with sad and mistry things ...it time for some Romance...

priya18 6 years ago Harshad Chopra and Shivya Pathania keep up the great work. ..loving you as SaAz

Nandiita 6 years ago Harshad Chopra and Shivya both are amazing as SaAz...keep up the great work